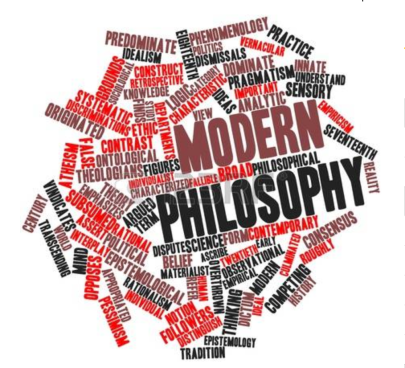 This course takes up what is denoted as “modern philosophy,” which as many of you know is not “modern” in the sense of contemporary, but a particular “period” dating, based upon whom you speak to, from about the 16th to the late 18th century. In the first class, I will discuss what I think is meant by the term modernity, why this is important for understanding in the contemporary period so much of what we think about ourselves, society, and the world, but also why philosophers mark a shift happening at a particular time such that they can mark a before and after that they dub “modernity.”

You will see in the syllabus below that we cover the more or less “canonical” figures of “modern philosophy”: Descartes, Spinoza, Leibniz, Hume, and Kant, among others. This leaves out much and I don’t think philosophy is a simple handing off of a baton or set of ideas from one philosopher to the next, all in the race to get to some correct representation of the world and our place in it. Each philosopher is formed in his or her milieu, writing not just as philosophers but while reacting to societal forces informing and forming them. There is no philosophical dialogue that is ahistorical and we will never read them in such a way, even if Descartes’ cogito is indeed said to be outside of history, just as Leibniz’s monads literally have no time for themselves. This is an exciting moment or sets of moments in the history of thought and the metaphysical daring of these thinkers cannot be overstated. I have, for the most part, left aside their explicitly political writings, though these are important to me and were even more important to them. There are multiple reasons for this: time is not on our side in reading through a vast literature this semester, but it’s also the case that we must understand what is meant by these figures’ works on epistemology and ontology, since that is how they will be referenced in most courses you take in our department.

In addition, you will notice that one strand or several strands of reading these philosophers is emphasized, notable feminist and intersectionalist (particularly critical racial) readings. Let me state it explicitly so it’s clear from the very beginning: these are not “rejectionist” readings of these philosophers and each in turn are as erudite and textually based as you will find in the most standard readings—often more so since these often simply parrot a “common sense” view of these philosophers passed along like banal cliches, as if there were not something new to discover in them each time we read them. There is this idea that a “feminist” reading is somehow less “objective” or is more slanted than those types of readings: it won’t take long for you to see this is not the case. My reasons for including this manner of reading is so as not to deny the historical milieu in which these figures were writing and to consider how it affected their most metaphysical and epistemological of writings. Moreover, you will see that these readings do not reject Descartes et al. on feminist grounds, but take them up carefully and often show hidden resources for thinking so-called “feminist” concerns. But this is not a course in feminism, but rather one that shows the different ways of reading these texts, highlighting implicit assumptions, places their thought can be brought in the contemporary age, and so on—in short, less “feminist” than just good critical thinking and engagement, as any philosophy course should do. To help you in this engagement, I have spent much time curating a set of secondary courses (podcasts, book chapters, and articles) that I believe will help you beyond my lectures make sense of often difficult material. This will be an exciting dive into some of the most important figures our tradition offers—I look forward to it.

Skepticism and the Advent of Modernity:

Paper 1 Due: In this paper you will write four pages on the difference between Cartesian dualism and Spinoza’s parallelism. What are their different conceptions of substance and how they come to impact these different ways of looking at these two different means of thinking the world. (15 pts)

Take home examination due: April 19, 9am, via email to professor.